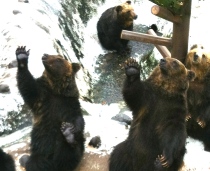 These bears are eagerly waiting for their English lesson to begin.

Last week I took part in the #ELTchat on “Entering and Exiting: The Importance of Beginning and Ending Lessons Well.”  There’s a fantastic write up of the chat by Sue Annan on the ELTchat blog.  After the chat was over, I spent a little bit of time thinking about how I’ve started my classes over the years.  It dawned on me that some of my warm-ups and class starters might be less than typical.  I also realised that I haven’t done a listicle blog post in a while.  So here, in listicle form, are 8 relatively novel and potentially dangerous ways to start a lesson:

8. Don’t do much of anything (just listen): I have 50 minutes in which learning can/might/might not take place.  It’s not a long time.  Sometimes I feel like I need to squeeze out every second of learning that I possibly can.  That means I often start off class as soon as (or even before) the scheduled time.  A few years ago I and some of my coworkers were watching a video of the start of one of our lessons. As soon as the chime rang, Trent, the teacher in the video, started telling students to get in their seat so he could start class.  The students shuffled towards their chairs and settled down.  After the video, one of the other teachers turned to Trent and asked him what the students had been talking about before class had started.  “I don’t know, I was too busy trying to get them to quiet down,” Trent said.  “Why not let them talk and just listen in on what they are talking about,” the teacher suggested.  There was a moment of silence in which years and years of missed opportunities rose up and swept over all of us.  So now I don’t see (or try not to see) students chatting at the beginning of the class as a behaviour problem or stealing time from learning.  Instead, I let them chat and listen in and take notes.  Often what they are talking about provides the focus for the rest of the class.  In one of my last lessons of the year, a group of students were talking about just how cool they thought Pope Francis was.  Which led to an impromptu lesson on how Popes are selected, what they do, and religion in general.  So I guess what I’m saying is don’t rush the beginning of class.  Getting all the learning juice out of your fifty minutes might require a bit of peeling (which in this case means patience and listening…never mind, this is a terrible metaphor).

7. Not all students are ready to start the lesson at the same time or in the same way: we usually start off lessons with an activity which involves the entire class.  But in the real world, people often drift into a conversation (and sometimes drift out as well).  Instead of forcing everyone to jump into an activity, if there are two or three students who are ready and willing to go, just walk over to them, or call them together in a group and start the warm up with the students who are ready.  One of my favourite activities in this kind of situation is a simple pattern recognition game.  I might say, “2, 4, 6” and then point to the student next to me.  They will usually say “8.”  Then I point to another student, who invariably says, “10.”  Once all the students all seem to know what’s going on, ask one of them to say what the pattern’s rule is.  You can do any kind of pattern.  “Apple, banana, cat, diary,…” (each word starts with the next letter of the alphabet) or “I love cats but I don’t like apples…I like bread but I don’t like alligators (things you like start with consonants while things you don’t like start with vowels).  If they are really into it, you can let a student come up with their own pattern and the other people in the activity have to guess the rule.

Tell the students that as the class goes on, their job is to write down the three learning goals for the class (even if you only have two learning goals, still make three spaces.  Trust me, it all works out in the end.)  Maybe it’s the fairly opened-ended way I teach, but I find that what I believe to be the main points of a class are sometimes different from what the students chose to focus on.  By starting the class in this way, you not only encourage students to develop the metacognitive skills needed to take note of their own learning, you get a bunch of valuable information about just what each of your student is focusing on in class.  It also leads to a fantastic closing activity where students get a chance to discuss just what they learned.

[Side note: at the end of this presentation by Diane Larsen-Freeman, she shares a story about teaching 8 Chinese learners of English.  The entire presentation is amazing, but the way this anecdote highlights how students develop their own syllabus throughout a course is one of the best examples I’ve ever seen of how, regardless of what you want to teach, students learn what they want to learn.]

5. What the heck is that: bring something novel to class and plop it down in plane sight of the students.  Sometimes, in a language classroom, it’s easy to get memorising mixed up with learning.  Just because our students remember all kinds of English after a class is finished, doesn’t mean that there was much learning going on.  If we want our students to learn, there should probably be a moment of confusion mixed with wonder.  Giving our students a reason to genuinely ask, “What?” or “Why?” or “HUH!?” at the beginning of class helps create an atmosphere where learning can take place.  I once brought my folding bicycle into class, unfolded it at the start of lesson and sat it up at the front of the room.  It was the most successful lesson on modes of transportation I’ve ever had.

4. Be the magician who explains the trick: If you have a detailed lesson plan, pass it out to the students at the start of class.  Let students rank the activities they want to do from most to the least.  If they don’t want to do an activity, have them write a reason in the margins.  While teaching the class, use the marked up lesson plans from your students to modify the class.  If you alter the lesson, take a moment to explain how and why you are changing things based on their feedback. I sometimes do this with my more advance classes.  Not only is it a great way to get student input, I also think it’s a nice way to model how communication is a continuous act of negotiation.

3. Where is the teacher today: just start teaching class in a place and position different from your routine.  This is an idea I’ve lifted from John Fanselow and tweaked to take it to the extreme.  If you always start class by standing next to the board, start by standing at the back of the class near the window.  If you start class sitting down, stand up.  If you start class by sitting with your students in a circle, put your chair in the middle of the circle and start that way.  It’s an easy way to shake things up, get your students wondering about what’s going on, and changing the dynamics of the lesson.  I once connected this trick with “What the heck is that” by bringing in a huge box to class and starting the lesson by sitting in the box with the lid closed.  I couldn’t see the students, but I could hear them.  I started to tell a ghost story and just when things got their scariest, I jumped up, breaking through the top of the box.  One of the students, an older man named Yuichi, actually fell out of his chair.  I haven’t done it since.

2. Group lesson review: Give every students who walks through the door a whiteboard marker and instruct them to jot the most important thing they learned in the previous lesson up on the board.  Not only does this provide you with an opportunity to review what happened in the last class, it also gives you a chance to learn just what your students are most into learning now.  If your school isn’t rich in whiteboard markers (or chalk), you can have the students just write in very large letters on one sheet of paper and then tape their “most import thing” onto the board.  I have rarely (maybe never) been able to move on to new material after using this activity at the beginning of class.  Which is great because it not only helps highlight the importance of reviewing previous material, it also helps show the learners that they are all focused on different things and moving at their own pace.

1. Secede your position of authority: when a student walks through the door, hand him or her your pointer or whiteboard marker or whatever symbol of “teacherness” you might use and ask him or her to start the class off for you (In my case, I sometimes take off my glasses and perch them on top of the student’s head).  This is a high pressure situation and I don’t recommend just picking any old student.  But if you are willing to hand over authority like this–and the student is game to give it a try–it’s pretty amazing what a learner can do with a few minutes at the beginning of class.  In my classes, students have: orally quizzed the other learners on vocabulary; taken role-call; given a brief summary of what they learned last week; and engaged the class in small talk about what they did during the weekend.

We often say that the first few moments of a class are the most important, that they set the tone for all that follows.  This might be true, but I also think that it’s an awful lot of pressure to put on ourselves and our students.  Sometimes the first few minutes of class are just that, the first few minutes of class.  If things go wrong and we are honest with our students  and simply say, “Hey, I tried this new thing at the beginning of this class, and you know what, it didn’t really work out,” your students will be willing to forgive you and move on to the next moment of learning.  Besides, like a conversation filled with false starts and sudden shifts in topic, playing with class openings gives our students a chance to deal with oddity, novelty, and even failure.  So instead of using the first few minutes of class to get all the students to move in lock-step, perhaps our learners would be better served by creating a space to improvise, to create a kind of communicative jazz in which everything might fall apart at any moment.  Because that’s probably a bit closer to what is actually happening as our students work together, while struggling individually, to grab ahold of this things we call language and make it their own.

Teaching at the intersection of law & language support.

翻訳・執筆のお手伝いします For all your writing needs

For you, then your learners