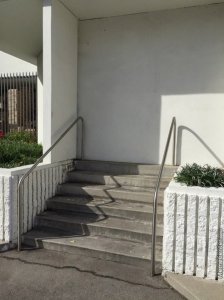 a pretty useless string of directions in staircase form

The other day I was watching and transcribing a video of a class I had run earlier in the day.  It was a lower intermediate class on mental and physical health with some of the material drawn from a coursebook.  The 14 high school students in the class had been working with this particular language for about 2 weeks.  When planning for the lesson, I had struggled to find a way to make the language seem, if not vital, at least fresh again.  Before I was an English teacher, I had been a social worker in Chicago and part of my was doing intake evaluations at a community mental health centre, and later at a large state mental hospital.  So I decided to pull my past experience into to classroom and teach my students how to do a basic mental health evaluation to check if a potential patient is physically able to take care of themselves, and is oriented to time, place, self/person, and situation.  The students were engaged from the beginning to end of the two consecutive 50 minute lessons.  And in general I though the class went pretty well.  But going over my transcript, I noticed that I had given the following directions during the lesson:

Now I could be off a bit in my estimates, but I would guess that I have probably given these 3 directions to students about 123,678 times in language classes over the past 15 years.  I have also transcribed my classes almost 100 times at this point. And yet, yesterday was the first time I noticed just how strange that collection of sentences seem.  They are something you would only, ever, hear in a classroom (and perhaps primarily a language classroom).  They underestimated my students’ ability to think for themselves and naturally understand what they should be doing.  And each and every one of those sentences, with minor tweaking be turned into language that a student might actually hear or want to use outside of a classroom.

Why would I say, “Stand up, change partners, and have the same conversation again,” when I could just as easily say, “You all have some very interesting things to say.  I bet someone else would be interested in hearing it.  Why not tell someone else about it?”  In fact, since most students finish doing fluency practice (which was what was going on when I said this) at different times, I could also just as easily walked over to a pair of learners that had finished practicing a conversation and said, “That sounded really interesting.  I bet [insert name here] would like to hear about that.”  And I’m sure there are many, many more ways to give these instructions in language which seems to value what the students say as meaning based conversation (not just language practice) and which can also be used outside of the classroom.

And then there is the long string of directions, “First write your answers to the questions down in your notebook.  After you’re finished, close your notebook and then say what you wrote to your partner.” These seem to be to be particularly ripe for some tweaking.  Having to understand and remember 3 steps in a process seems to put an unnecessary burden on the students.  I could easily separate out all three steps and modify them so they end up looking something like: “Why don’t you organise your thoughts by writing them down first.” And then, when a student (or all the students) have finished, I could add, “How about if we exchange some opinions.”  I don’t think I would need to tell students to close their notebooks at all.  The students who felt comfortable talking without their notes would, the students who needed the notes to comfortably engage in conversation could use them.  In fact, I could probably lose that last bit of instruction entirely.  Instead of telling the students to talk to each other, i could just model the behaviour by going up to a student and sharing my ideas on the topic which they have just spent some time preparing themselves to talk about.

Finally, the idea that I need to tell my students, “Make sure you are listening to your partner,” seems particularly egregious.  My student know that they should listen to each other.  When they can’t, there’s usually a good reason for it.  Mostly I find that the language they have to produce after their partner finishes speaking is so overwhelming that they are pretty much using up all their working memory just trying to make sure that they can say what they are supposed to say next.  And let’s say they could listen to their partner but don’t, I’m guessing that this is a sign that our ideas of what constitutes ‘listening’ might be different things.  Instead of telling them to listen, if I want them to exhibit a particular kind of listening, probably I should model it and encourage them to do it. as well.  For example, having students repeat the key points of what their partner says before they start to speak themselves is a good, solid, active listening technique.  It’s rarely used in Japanese conversations.  And not only does it require listening, it’s a skill that they can use in many communicative situations.  And I do in fact teach this type of ‘active listening’ or mirroring technique in some of my classes.  So if my students don’t seem to be listening to each other during a conversation focused activity, I could just encourage them to use these types of active listening techniques as opposed to the slightly rude and rather vague listen-to-your-partner thing.

With a little bit of thought, I could probably turn a lot of the directions I give to students into something more useful, and by useful I mean the directions themselves could be a source of language input.  I’ve spent a fair number of hours (smashing my head against a wall) wondering why students sometimes don’t bother to listen to activity directions.  Perhaps some of that time could have been better spent asking myself, ‘is what you’re saying really worth listening to?’

[A big thank you to all my friends who helped my write this post by joining in on the #isitreallyuseful twitter party.]

Teaching at the intersection of law & language support.

翻訳・執筆のお手伝いします For all your writing needs

For you, then your learners