[Note: the material in this post eventually became the material for “Rooms within the heart: Tanka as a medium for cultural exchange,” a short paper presented at The Festival of Ideas Literature in Language Teaching Conference, Kyoto, Japan, 2016]

As #TheGreatCourebookDebate–kicked off by Geoff Jordan–rages on (see here, here, here and here and here), I thought I would take a moment to share something that’s been going down in my classes.  I realise that this post might seem only tenuously connected to the coursebook debate, but I hope you will give me the benefit of the doubt and read to the end.

A few months ago I stumbled upon Tesal Sangma’s blog, TESL with Tesal.  Tesal is an English literature/language teacher in India and also a poet.  At the time, I was planning the syllabus for a two hour a week project English class and thought that working with tanka (a form of short Japanese poetry) as well as poetry from one other country could be an interesting way to get my students thinking a bit more about the language they are learning, how culture relates to communication, and something about the flexibility of language and the need to move beyond word for word translations.  Tesal agreed to have his students from the Bachelor of Social Work programme at Martin Luther Christian University in Meghalaya, India take part in the project as well.  Soon after, Tesal sent me a series of poems from North-East India.  He spent time adding explanatory notes to each poem and formatted them for easy printing in a PDF file.  I’m including a link to a PDF of ‘Soul Bird’ by Temsula  Ao in this post because it is a lovely and accessible poem.  In addition, I have shared it with some of my students, and the general reaction can be summed up by Re-Chan, who upon reading it, simply closed her eyes and said, ‘Wow.’

Starting in July, I will be using this and 3 other poems from North-East India in my class, but the first half of our linked classroom project has been focused on tanka.

I had a few goals for the project which I jotted down and shared with Tesal before we started.  Basically, I was hoping that my students here in Japan would:

I brought a number of contemporary Japanese tanka collections to class and my students each picked out two tanka they liked.  We spent a bit of class time discussing why the students had picked those particular poems.  Many, but not all of the conversation, went something like this:

A: I think this poem is very good.  That’s why I picked it.

Once students had discussed the poems, I had them form small groups, each group composed of students with similar taste in tanka, as they would be working together as a group to translate 2 of their selected tanka.  The next class period was structured in a ‘translation house’ style.  Groups picked one tanka and translated it (very) roughly into English.  Groups then exchanged their rough translations with each other, and translated the other group’s poem again, this time they were directed to focus on the level of the line as opposed to individual words only (which is what happened the first time around).  Once the poems were translated a second time, groups exchanged tanka again and did another translation.  Finally the tanka came back to the original group, and using the previous three translations, they decided upon a final translation to send to the students in India.  But as the students were finishing up their translations, one group in particular noticed that the poem they were sending might be hard to understand for someone who wasn’t Japanese.  They added some explanatory notes about Japanese culture and soon the other groups added a note or two to their own translated tanka.

In the end, we sent the students in India this PDF:

The PDF is collection of 7 tanka which includes:

We also created and sent a link to a Lino Board called Exploring Tanka, which contained the English translations, the questions from my students here in Japan, and some of their answers to these questions. 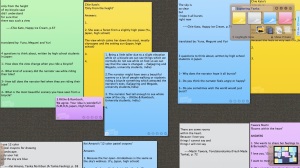 Over the past week, my students and the students at Martin Luther Christian University have been engaged in a pretty interesting dialogue on the Exploring Tanka Lino board.  And over the course of this two month project, students have dealt with a number of language related issues which clearly exceeded the three goals I had identified before we started the project.  Either by themselves or in their groups, and with my guidance or wholly on their own, my students have:

Seeing all of the benefits that come from a project-based language class, you might come to the conclusion that I am not a huge fan of coursebooks.  And you would be mostly correct.  I do not think that coursebooks, aside from saving teachers a chunk of time here and there, have done very much to make the world of ELT a better place.  But time is what I find myself wanting more than anything else at the end of a week, and so I still do use coursebooks.  In fact, over the course of the poetry project, I also taught a coursebook unit on ‘Talking about TV’ in which my students managed to practice all of the skills touched on above.  Perhaps, as Geoff Jordan has suggested, I, and other teachers like me, only find coursebooks valuable because we use them “in ways so entirely different from the way the authors intend them to be used.”  Perhaps if ELT was structured in such a way that I had more time every week to think and plan for my lessons, I would be less ambivalent about coursebooks.  Perhaps, I would be writing with conviction about how there is really no place for coursebooks within a language classroom.  But for now, on a very personal level, I still see that they have a place within my school, within my class.

While I still see that coursebooks serve a need, I also see glimmers of how that need can be met in other ways.  Perhaps that’s part of the reason why I wrote this post.  Perhaps that’s part of the reason why I took the collection of tanka poetry and worked with my students to turn it into a PDF file that I hope other teachers might be willing to use in their own classrooms.  Because if there is one thing I can fault coursebooks with, it is the fact that they provide seemingly simple and convincing answers for questions which are never simple and rarely answerable. We really do not know the best way to learn a language.  We do not know exactly what materials will engage students and keep them exploring, using, and playing with language in a way that will best help them acquire English.  But the more spaces we have for teachers and students to make, change, and use materials that are built organically, out of the interests and needs of students themselves, the greater the chance that we will begin to find the answers to those questions which actually suit our particular students’ needs.  Answers as quirky as a poem, or even, perhaps, as stunningly individualistic as the learners who make up our classes.

4 thoughts on “In Place of Coursebooks”